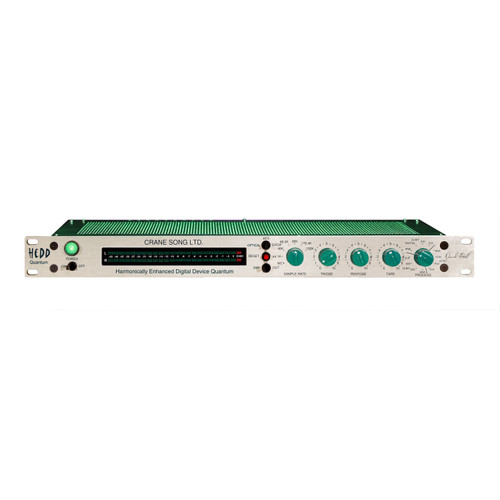 Dave Hill has worked tirelessy for the last few years designing and improving his already amazing clock throughout his products, but when he re-designed the Avocet IIA he managed to achieve the subpicosecond jitter clock called the Quantum which is now available in the HEDD Quantum. This Crane Song subpicosecond jitter is extremely accurate, providing the listener with pristine imaging, a depth of sound and detailed transit response that hasn't been heard before.

As well as improving the internal clock, the new HEDD Quantum can be the Master Clock to your system. There are 6 new Word Clock ouputs which allows a number of flexible recording and tracking options, e.g. you could use the HEDD Quantum as a Master Clock whilst using the A/D and D/A simultaneously.

The A/D and D/A section can be run at different sample rates at the same time with this being the first Crane Song product to now include the subpicosecond clocking in an A/D stage.

Alongside the AES/EBU connections, there are now Optical I/O via Toslink connection. In the Digital setting the HEDD will run digital I/O from one of 3 sources and output on all 3 digital ouputs and the analogue output at the same time.

The classic Crane Song HEDD DSP emulation of Triode, Pentode and Tape Emulation are also provided in the unit allowing you to add further analogue flavour if required.

An analogue Crane Song HEDD Dither is available and is selectable between 16 or 20 bit.