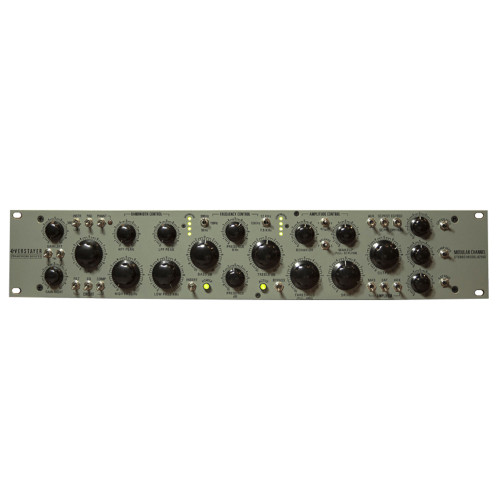 The Overstayer Modular Channel Stereo 8755DS is a versatile stereo Line and instrument channel strip designed for tracking and mixing and offering anything from subtle layered enhancement to complete sonic destruction.

The preamp lets you choose between balanced line, microphone and high impedance inputs to accommodate your requirements as a tracking or mixing tool. The Preamp provides more than 40dB of gain using discrete circuitry with independent left and right controls.

The balanced line signal can be routed through the preamp to drive the front end. Direct outputs are provided at the preamp stage and can be used independently with Line input selected.

The following filter section provides resonant high-pass and low-pass filters, inspired by filters typically found in synthesizers and offer a control over the frequency response and its resonance. This is augmented by a two-band EQ with low and high shelves. Three frequency points for each band are provided to quickly shape the sound. The EQ can be used in the main signal but also in the compression side-chain and the Dry/EQ Feed.

The VCA Compressor provides a choice between Peak and RMS. Attack and Release controls are provided with three positions for each and a side-chain HPF is also provided. The Behavior knob transforms the compression curve and gives you a wide range of options from smooth levelling to explosive mayhem thanks to its use of inverted ratios.

The Harmonics section comprises of three stages and can be engaged in any combination from the subtle MAS low order harmonics, SAT for a more obvious saturated sound to the Hex mode which provides higher harmonics and layered distortion.

Finally, a powerful Mixer Matrix lets you send independent stereo feeds to before the filter or after the EQ, while the Comp Feed lets you send the signal out pre-harmonics while the Sat Feed gives you the full flavour of the entire signal path.