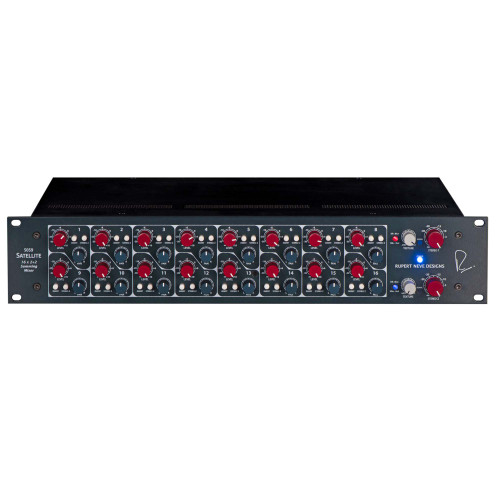 Built around many of the topologies and custom transformers made famous with the 5088 mixer, the 5059 is a 16 x 2+2 summing mixer designed to deliver the ultimate out-of-the-box sonics and control in a 2U, rack-mountable chassis.

The 5059 features 16 channels with individual level, pan, inserts, stereo-2 sends, and master texture controls, providing easy integration with outboard equipment, complete control for two separate stem mixes, and the ability to dial in analog mojo in two modes. With the same sonic heritage as mixers used to create countless hit records, the 5059 Satellite imbues your tracks with the legendary warmth and presence of a Rupert Neve design.

The Signature of Excellence

The most important element of the 5059 is its legendary sound, the keys to which are the +/-24V class-A topologies and custom transformers, fine-tuned over a number of years to provide exceptional sonic performance and to completely eliminate crossover distortion.

When combined with Mr. Rupert Neve’s transformer design and implementation, the 5059 achieves a remarkable purity, while also conveying the signature warmth and larger-than-life sound reminiscent of Rupert’s classic designs.

By connecting a second 5059 to the insert outputs of a 5059, the dual stereo outputs can be used as a way to add 4 auxes to each of the 16 channels. And when used with other products from Rupert Neve Designs’ summing family, the 5059 becomes an integral part of a complete modular system for world-class analog mixing and monitoring.

The 5059 also offers a fantastic solution for keyboard or individual instrument mixing, with its 16 pannable inputs, inserts and returns for effects and pedals, and up to 10dB of gain. It also allows for recording a stacked mix of sounds while simultaneously recording each of them individually via the “always on” insert sends.

Every mix demands its own treatment. In addition to the choice of outputs, the continuously variable Texture control with Silk Red and Silk Blue modes gives you complete control over the harmonic density and tonality of your mix – or lets you keep it utterly pristine and uncolored.

The Silk Red mode accentuates transformer saturation in the high and high-mid frequencies to amplify the vibrant midrange harmonics associated with Rupert’s vintage equipment, while Silk Blue accentuates saturation of the lows and low-mids to add thickness and weight to any source – especially useful for “thin-sounding” mixes. Unlike EQ, these Silk & Texture controls saturate the output transformers, and add highly musical harmonics to the source material according to the amount of Texture applied.

Drive the mix buss hard, choose your Silk flavor, and crank the Texture knob for a rich, saturated, vintage vibe – or disengage Silk entirely for clear, wide-open sonic beauty. The choice is yours.

Custom Transformers
Beyond providing galvanic isolation, the custom transformers in the 5059 are a key ingredient to its larger than life sound.

Stereo 2 Send
Sends the channel’s signal to the Stereo 2 buss, thus splitting the input channels into two stems for further processing and mixing with independent Silk.

Channel Level
Individual continuously variable level controls are provided for each channel from -∞ to +10dB.

Channel Pan
Individual continuously variable pan controls are provided on each channel of the 5059 with a 3dB pan law.

Channel Insert
Changes the buss input signal from the line input to the insert return. (Insert sends are always active.)

Master Output Level
Level controls are provided for each of the stereo outputs -∞ to 0dB.

Tree Audio 3 In the Tree Stereo