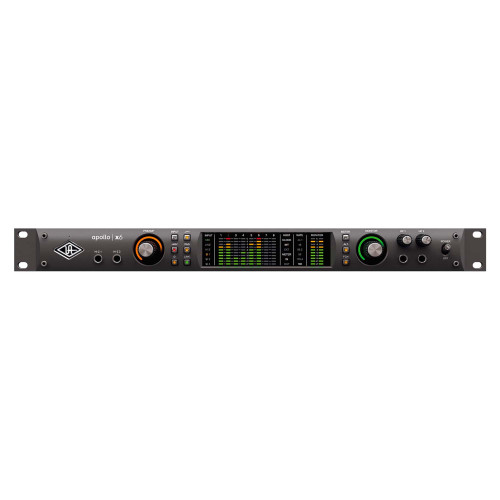 Record with elite-class A/D and D/A conversion — nearing the widest dynamic range and lowest noise available, at any price

With 129 dB dynamic range and -119 dB THD+N, Apollo x6’s open, natural sound rivals any dedicated high-end converter on the market — regardless of price — and is the perfect starting point for applying UAD processing.

From the tube warmth of Pultec EQs on guitars to the musical tube limiting of the LA-2A on vocals, or the pump of a genuine 1176 or Fairchild 670 tube compressor on drums, your recordings will take a giant leap forward with a rich, three-dimensional analog sound that UAD plug‑ins provide.

The secret to Unison is its hardware-software integration between Apollo’s mic preamps and its onboard HEXA Core DSP Acceleration. Simply place a Unison preamp plug-in on your mic input in Apollo Console software, and it physically reconfigures the Apollo interface's impedance — so you can tap into the classic sounds of the world’s most recorded mic preamps.