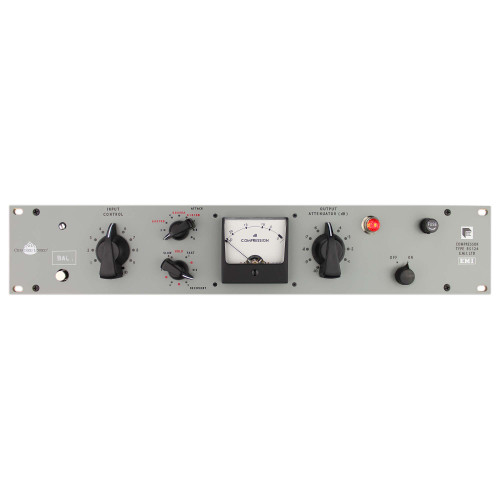 The Chandler Limited RS124 Compressor is a recreation of one of the most coveted audio valve compressors of all time, the legendary EMI/Abbey Road RS124, reimagined for use in the modern studio environment.

First designed in 1960 by Abbey Road Head of Techncial Bill Livey, Deputy Head Len Page and seasoned EMI Audio Designer Mike Batchelor, the Abbey Road RS124 compressor is one of the most coveted pieces of recording gear ever developed.

Born out of the inadequate ALTEC 436Bs acquired by EMI in the late 1950s for Abbey Road Studios, the RS124 compressor is most closely associated with recordings made by The Beatles at Abbey Road Studios. Present on virtually every Beatles session, the RS124 left its remarkable signature across most of the catalog.

The RS124's undeniably smooth character and ability to tame transients without muffling the sound at steep compression levels, quickly became popular with Abbey Road Studios engineers and widely used throughout the now historic studio, for tracking, buss compression, mixing, and mastering. They where so integral to the recording and mixing process that a pair can be seen in almost every control room photo in Abbey Road Studios during the 60s period.

The RS124, a “variable-mu” compressor circuit, was built for use at Abbey Road Studios, and was never commercially available until now.

The Chandler Limited RS124 Compressor harnesses the sound and personalities of Abbey Road Studios’ favorite historic RS124 Compressors (Ser. No’s 60070B, 60050A, and 61010B) still in use at the famed studio to this day, all in a single unit.

The RS124 brings home the sound of a legend, reimagined for the modern era, today.