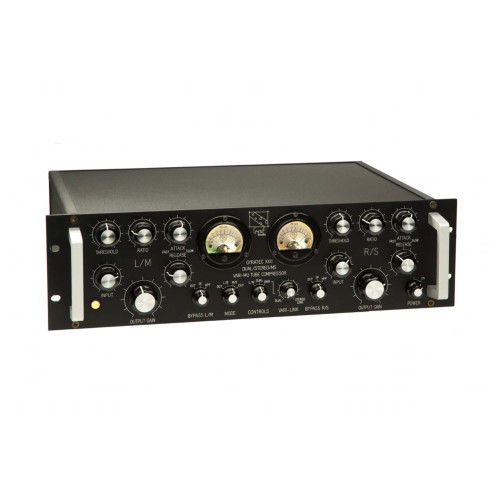 G22 is an elaborated and dual’ified version of our venerable G10 vari-mu compressor. This incarnation allows it to be dual-mono, while still keeping a backwards-compatibility “G10 mode” where one set of knobs controls real stereo compression, like you’d want most of the time in mastering.

The audio part of the circuit is a faithful reproduction of the G10 that has been our flagship for more than 15 years – if it works, don’t fix it. The only minor change is a re-bias of the output stage, which allows some 4-5dB more headroom while preserving the original stage’s soft transition into overload.

Some changes has been made to the sidechain functions, including a wider threshold range (to allow S compression in weak-S M/S-mode) and even faster fastest attack time (because we can, it’s a vari-mu you know…)

A simple sidechain high-pass filter was added (located on the bypass switch) which cuts off compressor keying below ca. 80Hz at a slope of 6dB/oct. This mainly to keep pumping artifacts under control when working fast in bass-heavy material.

M/S Mode
Input and output transformers can be switched between standard two-channel L/R mode and the M/S mode where both matrixing and dematrixing done is internally: M/S mode allows you to independently control dynamics (and levels) in mono and side parts of program material and still have the result on the output as standard stereo information.

Linking/dynamic interaction between channels in dual-mode can be set continuously from none to full by the Vari-link control knob – enabling you to dial in a difference in processing between channels, then varying difference amount or compression “correlation” with a simple turn of a knob. This function is specially nice when dealing with M/S compression, where the amount of correlation gets very important.

Bypasses are, off course, hard and relay-based. You bypass, G22 acts only like an additional piece of cable. Note that some modes prohibits certain bypasses – like when working in M/S mode, you can’t separate and hard-bypass M or S alone (as we use both channels transformers for the matrixing)  so when you bypass M, it’ll bypass S also and the other way around..