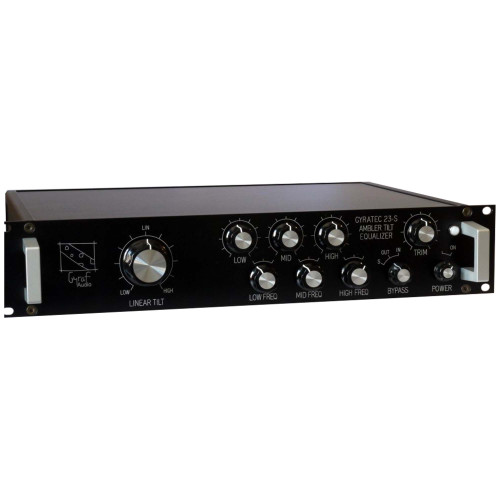 The G23-S is our own original design Tilting-type Equalizer aimed mainly at mix and mastering, for the situations where you have a mix that is already nearly-perfect balanced, but want it a tad darker or brighter without messing up the overall definition. The recent -S version has been extended, now containing two entirely different topologies for makeup gain and interfacing.

Gentleness and subtlety were main design targets when designing the G23-S: Nothing anywhere near surgical: Tilting and Highs at +/-4dB, Mids at +/-2dB, and lows at +/-6.5dB

What sets it apart from all other tilt EQ designs is that we designed it around a highly linear 1dB/oct slope filter, so that rotating the tilt control will tilt an almost ruler-straight response curve, to a maximum steepness of 1dB/Oct.

Our reason for doing it like this is that although a standard tilt (which is basically a Baxandall control, that cuts top while boosting low and the other way around) does come with the associated phase roll that is a side effect of all analogue-domain filters. And this group delay/phase roll (which is distributed just around cutoff frequency) easily identifies the sound to our ears as “equalized”.

So what we acheive in the 1dB/Oct tilt function is to “spread out” or distribute the “needed” phase roll across the whole spectrum, meaning that at any given interval, only minute amounts of group delay is apparent.

In total, it allows quite some correction without sounding “Eq’ed”.

And because you’d occasionally want to correct outer ends of spectrum, we have added a gentle Baxandall tone control, shelving lows and highs, wide-Q bell mid, each at three selectable frequencies, that we spent quite some time optimizing.

The active technology of the G23-S is selected from the bypass switch:

At the “IN” position of the bypass switch, you select a tube gain stage based on 6H23n (E88CC/6922) tubes, which are combined with classic transformer-balanced input and output interfacing.

In the other position of the bypass switch, you switch the bypass to “S” – and we replace everything but the front panel controls with an entirely different technology: The inputs are now integrated balanced differential receivers, the tone circuit itself is handled by a high-grade opamp, and the outputs are driven by state-of-the-art active servo balancing circuits. Two entirely different personalities in one box.

G23-S is stereo, single set of controls. Bypass is full-relay, and it has a gain trim function for easing comparison between direct and processed material.